Presidential primaries spawn the next crop of impersonators 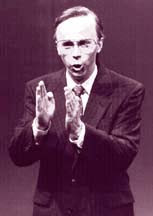 Not only have voters been watching the results of the country’s presidential primaries with anticipation to see who the major political parties’ nominees will be, but so have the country’s entertainers and impersonators.

A convincing impression of a presidential candidate or president can be a huge boost to a career, and we only need to look at NBC’s "Saturday Night Live" for evidence of that. The long-running late-night comedy show has even been a factor in the recent Democratic debates when Sen. Hillary Clinton brought up a recent SNL skit where the cast parodied the alleged kid glove treatment her opponent, Sen. Barack Obama, has received from the press. Clinton even appeared on the show last week next to cast member Amy Poehler, who does a pretty good imitation of the New York senator.

Taking a recent listen to some radio and comedy shows, it appears some impressionists have gotten Republican nominee Sen. John McCain down with his signature catch phrase, “my friends.” In addition to Poehler, many entertainment bureaus already have Hillary Clinton impersonators in their stable because they often get requests for both Bill and Hillary Clinton. That has held true for well-known first ladies and their spouses, like Ron and Nancy Reagan and George and Laura Bush. However, no one has yet mastered the voice of Obama.

“I have a few George Bushes, I have a Bill Clinton and a Laura Bush,” said Kathy Krajewski, the owner and founder of Rochester, Mich.-based Double Exposure. “I go out all the time to look at national acts; we need more impersonators in Michigan.”

Double Exposure primarily handles weddings, but it provides planning for every kind of party imaginable. It, like most party and entertainment bureaus, has stables of look-alikes and celebrity impersonators it can call on when a request comes in. Depending on the medium the impression is intended for, a good presidential impression may consist of a physical resemblance or having the speech patterns and gestures down.

“Every four years around election time you get more interest than you normally do,” said Bernie Stevens, owner of the entertainment bureau and party planning company Bernie Stevens and Associates, based in Holly, Mich. “Normally, you don’t get a lot of calls for political figures.”

If you bear a striking resemblance and have the speech patterns down of former Democratic Sen. John Edwards, for example, seeing him drop out of the race was not a happy event. The same thing would be true if you had former Arkansas Gov. Mike Huckabee or Tennessee Sen. Fred Thompson down cold.

George W. Bush is an impression many people have down, and those comedians who do him well hate to see him go. However, Stevens said there is usually a market for former presidents, depending on their popularity and if they are still alive. Doing an impression of a recently deceased president may not strike some people as funny.

Famous impersonator Rich Little’s career took a bit of a nosedive after Richard Nixon left the limelight and then passed away. However, Little is making a comeback, and on a recent successful appearance on the "Late Show with David Letterman" he told the audience: “The key to staying on top is keep your act fresh and keep coming up with new people all the time.”

Historical reenactors are also in demand, and presidents like George Washington, Thomas Jefferson, Abraham Lincoln and Teddy Roosevelt are in demand. The good news is no one is going to hold them to having the voice right.
“Lincoln, Jefferson and (Mark) Twain; those are the big three,” Stevens said. “They are in such demand because most elementary school students recognize the face right away.”
Posted by Communications guru at 6:13 PM